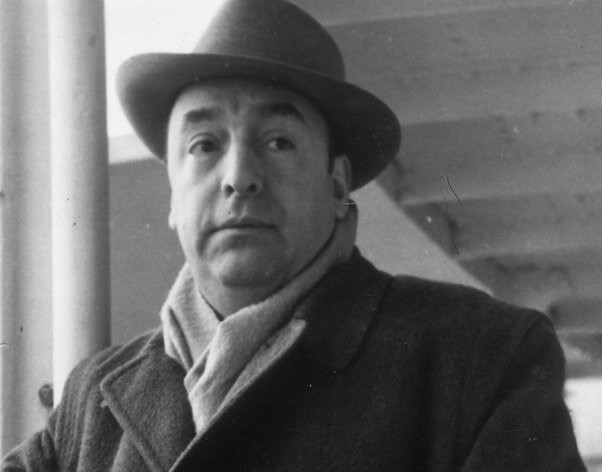 This event has passed.

To attend via Zoom, please register in advance for this meeting here. No registration required for in-person attendance.

On Tuesday, January 17, 1:00 pm – 3:00 pm, the Poetry Salon will convene at the Abbot Public Library to explore the poetry of Pablo Neruda, who won the Nobel Prize in Literature in 1971. Born in southern Chile in 1904, Pablo Neruda led a life charged with poetic and political activity. In 1923, he sold all of his possessions to finance the publication of his first book under the pseudonym “Pablo Neruda” to avoid conflict with his family, who disapproved of his occupation. The following year, he found a publisher for Veinte Poemas de Amor y Una Canción Desesperada (Twenty Love Poems and a Song of Despair). The book made a celebrity of Neruda, who gave up his studies at the age of twenty to devote himself to his craft. In 1927, Neruda began his long career as a diplomat in the Latin American tradition of honoring poets with diplomatic assignments.

The outbreak of the Spanish Civil War in 1936 interrupted Neruda’s poetic and political development. He chronicled the horrendous years which included the execution of Federico García Lorca in Espana en el Corazon (1937), published from the war front. For the remaining years of his life, he continued a career that integrated private and public concerns and became known as the “people’s poet.”

Diagnosed with cancer while serving a two-year term as ambassador to France, Neruda resigned his position, ending his diplomatic career. On September 23, 1973, just twelve days after the defeat of Chile’s democratic regime, the man widely regarded as the greatest Latin American poet since Ruben Darío died in Santiago, Chile.

Please join Claire Keyes, Professor Emerita at Salem State University, for a discussion of Pablo Neruda’s poems. We’ll meet at Abbot Public Library’s interim location on Brook Road on Tuesday, January 17 from 1:00 pm – 3:00 pm or via Zoom. To attend via Zoom, please register in advance for this meeting here. After registering, you will receive a confirmation email containing information about joining the meeting. No registration is required for in-person attendance. All are welcome.